I spent last night in Weed, California. This is the town George and Lennie were chased out of before arriving in Soledad for Of Mice and Men. I had planned to drive straight through to Susanville, which is where I am now, but I needed a shower and it was another 2 hours away and I was tired. Plus, I got to spend the night in Weed with a view of Mt. Shasta out my window.

I drove over a mountain range of 5000+ feet, though I think we’re still at a pretty good altitude, and there was a hiker up at a scenic overlook which was the craziest thing because I would guess that he was between 50 and 60 years old and had hiked up this mountain and was headed who knows where.

After dipping below 5000 feet into a bit of a valley, I began seeing “Look out for cattle” signs. I didn’t see any cows, but there were vast cleared areas for cattle. And then I saw train tracks and I thought that was crazy until I remembered that after wagon trails, railroads were next thing to be carved across the west.

Susanville is a nice town – half modern, half old.

I’m going to take a few pictures here then drive to Reno, Nevada and then on to Carson City.

Went to a used bookstore in Susanville that was filled with books, even stack on the floor. But it was still a big building with plenty of room to walk around.

I had a lengthy chat with the guy who owns it (with his mom) about bookstores, publishing, and editing….  They own the building, so they only have to pay taxes and utilities, so they do just fine.

I drove 255 miles today and wandered around the older part of Reno.

I’ll be spending the night here in Carson City. 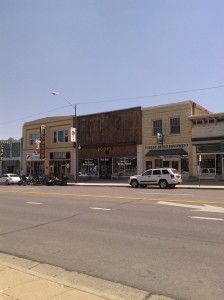